During the debug phase of a program it is important to have a display of the real-time kernel or application traces. If a standard output device is used such as a UART these traces are very intrusive:

In order not to disturb the behavior of the application under development, the ideal would therefore be to have a communication channel much less intrusive than a UART, USB or Ethernet…

The SWO (Single Wire Output) trace port is an interesting hardware feature of ARM Cortex-M, a part of the CoreSight Debug block. It can be used for several purposes, here we will only talk about the issuance of ASCII traces.
As the name suggests, it only uses one pin of the MCU.

The SWO transmits data packets preceded by a header character. It is possible to send packets of one byte, two bytes (a 16-bit word) or four bytes (a 32-bit word). In our case, a package is therefore made up of 2, 3 or 5 characters.

Up to 32 channels (called “stimulus ports” by ARM) can be used.

The encoding on the output can be of the UART or Manchester type. We will use UART type encoding.

The SWO output can operate at a very high speed. The problem is to have a probe capable of receiving this signal, and to transfer it in a practical way to a PC.

With a STM32 Nucleo board and 2 USB connections to a PC it is possible to have a complete development configuration:

At 12 M baud, transmitting packets of 1 character takes 1.7 µs (1 header + 1 character) when the FIFO is full, which is not very intrusive (if the FIFO is empty it is even faster!). This is enough not to disturb the timing of the application in most cases. 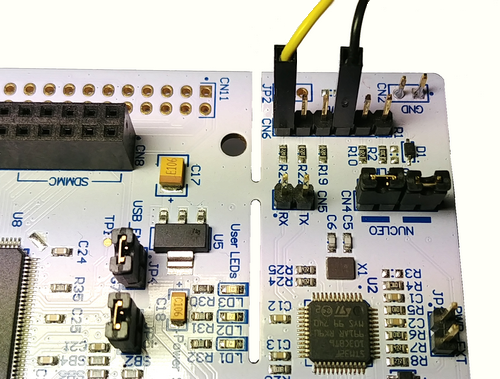 The packet header is automatically inserted. It indicates the useful length of the packet and the number of the stimulus port which sent it.

Luckily if we use the “stimulus port” 0 the header of each packet is a non-printable character less than 0x04. Therefore by sending the packets to a terminal the headers are not displayed, and only the trace characters are visible.

Some commercial applications use stimulus 0 for ASCII display in a console, and another for more technical trace information. Sorting is done by using the packet header.

To be able to use the SWO output, you must initialize the ITM component of the ARM. For example on an STM32F4xx, this is done with the following code:

This function must be called only once before using the SWO output.

If the initialization function is called with a baud rate of 12000000, Putty must be configured with the same baud rate when using the virtual COM port of the C232HM.

A link at the bottom of the page gives more precise indications.

This is a very short code. But before, remember to check that the stimulus port is well initialized, and that the FIFO is not full. This gives the following code, a little simplified, since it is not thread safe.


The limitations of SWO

With the SWO output, an FTDI C232HM cable and Putty, no need for expensive probe and complex Eclipse plugin to have a complete development configuration and honorable performance.

All this for 25 €, hence the title of this article!

PuTTY is an SSH and Telnet client (and also a serial terminal emulator), for the Windows and Linux platforms.
It is very easy to use and easily allows for multiple configurations. In addition, it is very small which is rare these days!

PuTTY doesn’t allows to send CR+LF when the Enter key is pressed. This prevents its use to issue AT commands to devices such as HC-05 or JDY-31.
Luckily someone modified this application and added a setting that allows this functionality, resulting in PuTTY-crlf.
The source code is on github: https://github.com/gniemirowski/putty-crlf
The Windows binary is here: https://www.grzegorz.net/pliki/putty-crlf.zip

Thank you to Grzegorz Niemirowski